When counting engagement, there are two terms you should know: reach and impressions.

Let’s say you have an ad that was displayed 500 times on social media pages. If 200 people clicked on your ad, your reach would be 200.

Impressions are the total number of times social media browsers have been showed your content. Impressions are different than reach because it doesn’t count people who click or engage with your content, just those who are exposed to it.

If your ad was displayed 500 times on social media, your impressions would be 500.

While both metrics are pretty similar, there are a few key patterns to note. In most cases, impressions will be higher than reach. This is because impressions count exposure, and reach counts interaction. Impressions, then, can oftentimes be close to the number of followers your accounts have.

Easy enough to understand, right? Impressions count exposure, reach counts clicks. Even though these two terms are pretty cut and dry, different social media sites have their own rules for how they count impressions and reach, and if you want to measure one over the other, it’s important to know what you’re looking at.

Facebook for Business defines impressions as “the number of times your ads were on screen,” and goes on to explain what they measure.

Facebook impressions break down like this: If I see an ad on Facebook, or scroll past an ad initially but change my mind and scroll back up to it, that counts as one impression. If I check Facebook again within 24 hours and scroll by the same ad again, that is counted as two impressions.

This differs from industry standards for ads. Generally, if an ad appears on a user’s timeline, it’s an impression. Facebook gets a little more specific. Further, impressions are counted the same way for video and image ads.

What that means is that a video doesn’t need to be played in order to be counted as an impression. To see if users have viewed the content you post, look under the “Viewed Impressions” section of Facebook for Business.

Now that you know about Facebook impressions and reach, let’s go over the impressions for other social media apps.

As stated before, different apps count impressions and reach in their own way. If you’re using a social media analytics tool to keep track of your metrics, be cogniscent of the small changes from app to app. This will improve your analysis of your results reports.

The way impressions are counted for each app relates to the main function of the apps, or how they work.

I love how Twitter gives you analytics for free. If you’re already logged in, results are presented immediately. Anytime a user sees a tweet you’ve made, you’ve earned an impression.

If you click on the “Tweets” tab on the site, you can see a bar graph of your impressions. Note that reach isn’t a trackable metric. Below is a screenshot of my Twitter analytics. 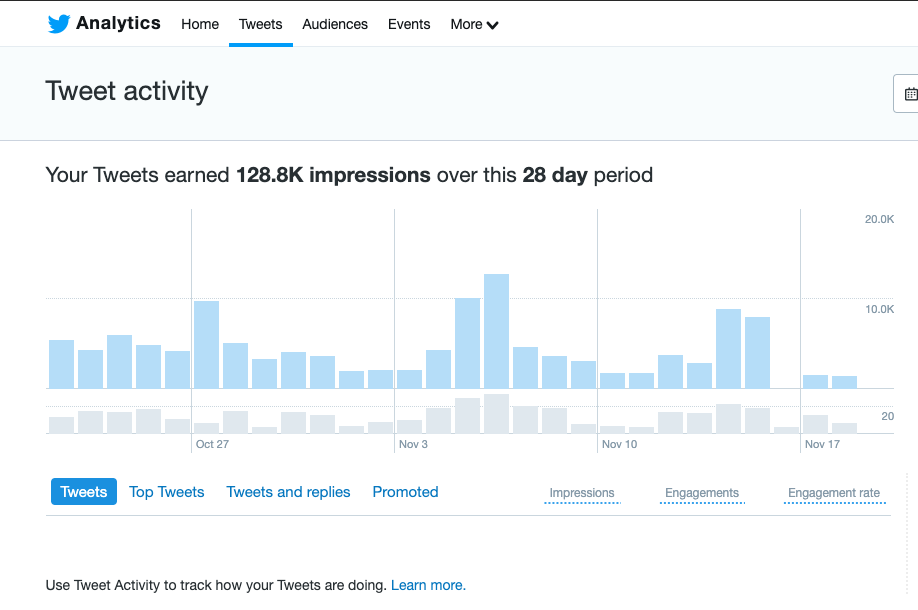 By hovering over any bar in the graph, you will see the number of tweets you’ve created and the number of organic impressions you’ve earned. Twitter counts engagement — clicks that happen on a tweet — and are presented in a line graph on the same page.

Reach and impressions on Instagram are separate entities and are defined that way. Instagram impressions are earned from the number of times a user sees a story, IGTV video, or post. Reach is defined by the number of unique users that interact with your posts.

“Unique” in this case means a mix of followers and people who your content is surfaced to based on common interests. For instance, because I like and follow posts from women-owned businesses, my timeline is populated with suggestions of women-owned businesses. I am a unique user in that category. 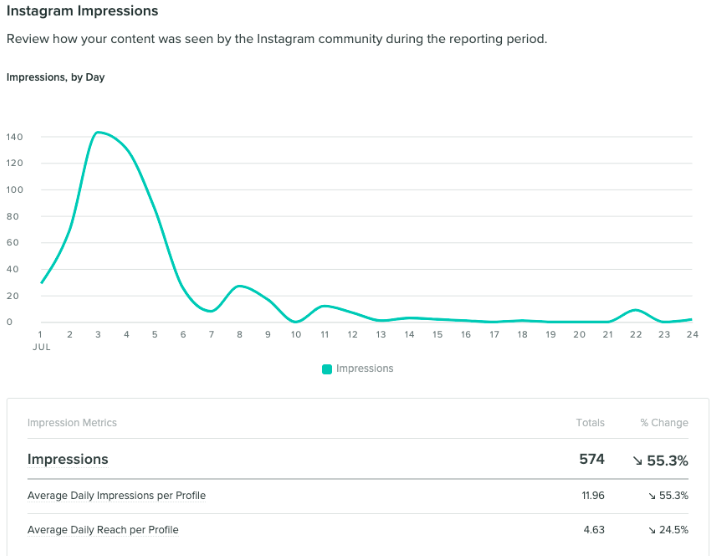 If impressions are higher than reach, it’s likely that your followers or audience are looking at your posts multiple times, say, every couple of times they open the app.

Which is more important?

When deciding which metric is more important to track, think about your business goals. While both metrics are valuable, if ads are something you want to pay super close attention to, close in on impressions. This is because all of your promoted and sponsored content is measured by the number of people seeing your ad.

For instance, if you pay for a promoted tweet on Twitter, the site will give you those numbers in your analytics report. This is also an indicator that Twitter and Facebook might be the apps for you to focus on, because they’re driven by impressions.

If raising brand awareness and engagement is your main priority, reach might be the metric you want to focus on the most. These numbers provide a weather report of how many leads you are gaining by providing the details of how many are interacting with your brand. Instagram might be your home base for that.

Tracking engagement is an important way to figure out total ROI with your business accounts. When in doubt, impressions and reach are key metrics to focus on, giving you numbers about leads and who is seeing posts.

For more tips on social media analytics, check out 9 essentials you should be tracking here.